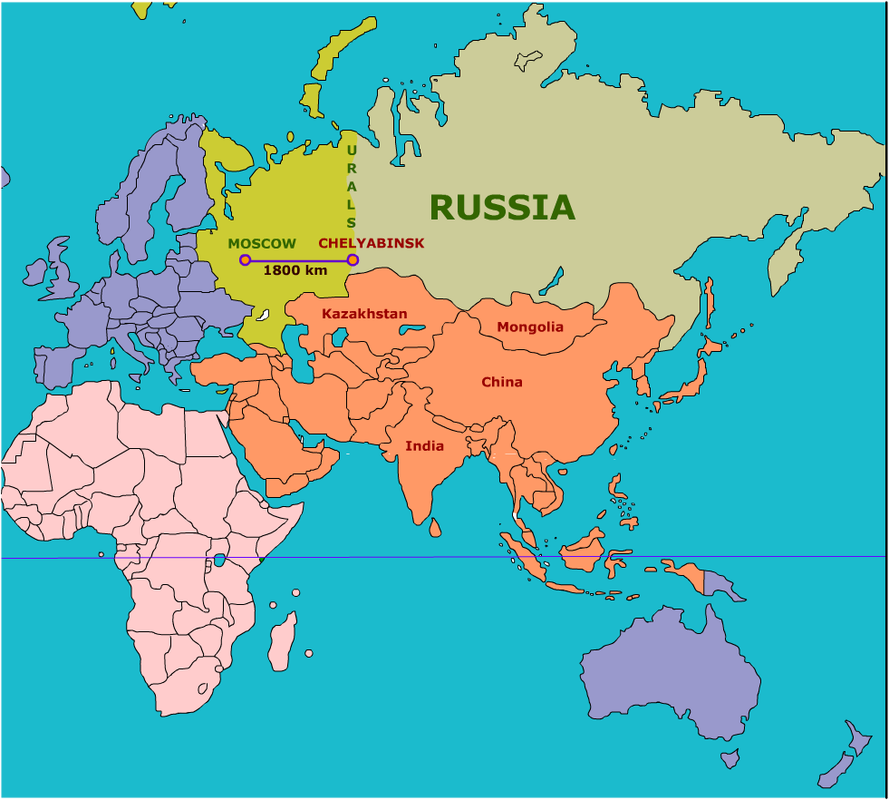 Russian is the only language widely spoken in Chelyabinsk. Several people speak Tatar and Bashkir. Finding an English speaker, outside the city of Chelyabinsk, will be near impossible.

Currency in Chelyabinsk,  is Ruble (RUB)

Chelyabinsk is located east of the Ural Mountains, 199 km south of Yekaterinburg. Its elevation is 200–250 meters.

The city is bisected by the river Miass which is regarded as the border between the Urals and Siberia. This is reflected in the geology of the place, with low granite hills of the Urals on the western side and lower sedimentary rock of the West Siberian Plain on the eastern side.

The “Leningrad bridge” connects the two sides, so it is called the “bridge of the Urals to Siberia”. Chelyabinsk itself is therefore also known as “The Gateway to Siberia”.

Like Rome, Constantinople, and Moscow, Chelyabinsk is said to be located on seven hills.

Chelyabinsk Watch Factory “Molnija” produces pocket, souvenir watches and technical watches for aircraft and ships. In 1980, the clock “Molnija” were given as gifts to participants of the Moscow Olympics Games.

Agro-industrial company “Makfa”, Russia’s largest producer of pasta, one of the five largest world producers of pasta. “Unichel” shoe firm is the largest manufacturer of footwear in Russia. Agricultural firm “Ariant” – leader in the production of meat products in the Urals Federal District of Russia, produces alcoholic and non-alcoholic beverages. American multinational corporation «Emerson» buying up shares of local businesses “Metran” organized in Chelyabinsk engineering center, building a factory for the production of industrial devices and equipment.

In recent years, Chelyabinsk significant role in the economy of the early play services, banking and insurance activities, logistics centers, tourism. The city is the central offices of major regional banks as “Chelindbank” and “Chelyabinvestbank”.

Public transport of Chelyabinsk is represented by a bus lines network (since 1925), tram (1932) and trolleybus (1942) systems, as well as private marshrutka (routed cab) services. The city has several taxi companies.

In 2014 in Chelyabinsk began to run electric buses (hybrid trolleybus and electric car).

Beeline and Chelyabinsk city electric transport in 2011 signed an agreement to provide passengers free internet. Currently Wi-Fi is available in some public trams and trolleybuses in Chelyabinsk.

Chelyabinsk started construction of a three-line subway network in 1992.

The city is served by the Chelyabinsk Airport.

The city has several libraries, including Chelyabinsk Regional Universal Scientific Library, with more than 2 million books, including more than 12,000 rare books and monuments (17th to 19th centuries), is the largest public library in the Chelyabinsk oblast.

There are nine museums in Chelyabinsk. Chelyabinsk regional museum was founded in 1913, and holds about 300 thousand exhibits. There are expositions of the ancient settlement Arkaim age 3rd to 2nd millennium BC relating to the “Land of Cities”, the largest fragment of the Chelyabinsk meteor, weighing 570 kg, famous decorated edged weapons of the 19th and 20th centuries, made by Zlatoust arms factory, exhibits Kasli artistic cast iron and much more. Chelyabinsk Region Picture Gallery has more than 11,000 works. Meeting up collections of art in Europe and the East (International Art), the national art of the Middle Ages, modern and contemporary, modern art. The peculiarity of the meeting are collections of icons (16th to 20th centuries), early printed books and manuscripts. The museum of railway equipment of the South Ural railway presented more than 30 exhibits of vehicles used on the rail after it in Chelyabinsk in 1892.

Museum of military equipment in the garden of Victory was founded in 2007. It is 16 eksponantov, including T-34, IS-3 tanks and multiple rocket launchers “Katyusha” issued in Chelyabinsk during World War II.

Chelyabinsk Zoo – Zoological Park, located in the central region of Chelyabinsk. On an area of 30 hectares there are more than 110 species, of which more than 80 listed in the Red List. Zoo participates in international programs for the conservation of endangered species, including Amur (Siberian) tigers, Far Eastern leopards and Polar bears. The zoo regular sightseeing tours, lectures, exhibitions and celebrations.

City also has a circus building.

In Chelyabinsk has Concert Hall. Prokofiev Hall of organ and chamber music with organ-known German company “Hermann Eule”. The tool consists of 2504 pipes, 37 registers, three manuals and pedal keyboard. His sound is a rare gentleness and generosity sound basic votes. Chelyabinsk body many artists considered to be one of the best in Russia and Europe.

In the city of Chelyabinsk are several churches built in the 19th to 21st centuries.